Maybe I should have titled this post “Why I haven’t built a traditional tool chest yet.”

I’ve read The Anarchist’s Tool Chest three times now. I’ve read it with an open mind and I’ve read it with a critical eye. It’s a compelling book, written with passion and conviction. It convinced me to pare down my own tool kit, to sell off duplicates and single-purpose tools whose functions can be performed with other, more versatile tools. It’s been a liberating process, one that has helped me rewire my thinking from that of a consumer to that of a maker. I still find myself looking around for tools to sell.

After three reads, though, I had one reservation that kept me from building a traditional tool chest. Well, make that two reservations.

The first had to do with floor space. I don’t have a lot of it in my one car garage. The space I would dedicate to a traditional tool chest is home to my sharpening station and a rolling cart that holds probably half of my hand tools. The rest are stored in a cabinet on the wall above my workbench.

I would gladly give up the cart in favor of a chest that would protect those tools from dust and swings in humidity. The thing is, though, I kept my great-grandfather’s Kennedy machinist’s chest on top of that cart. And that’s where my other reservation came in.

You see, I love drawers. I love the mystery of them. I remember as a kid I’d go to my grandfather’s house and look in every drawer in every tool chest, just marveling. (Okay, I still sneak a peak every once in a while. Fascinating.)

It’s funny, though: the thing I love about drawers–the mystery–turns out to be the thing that slows me down as a woodworker. I don’t tend to reach for the right drawer the first time. My brain just doesn’t work that way (or that well, if you ask my wife). For example, it took me twelve years to memorize what each of three light switches do at the back door of my house. The neighbors probably thought I was sending Morse code using my back porch lights.

Maybe I love something that’s not good for me, but I found it hard to give up my machinist’s chest. It’s a bit of self-sabotage to have so many drawers in the way of my daily practice. I used it mostly to store sharpening equipment: stones, files, file card, saw sets. There are also dental picks, Yankee screwdrivers and push drills, a Stanley Hurwood awl that looks like it was beat up by a rival gang of awls, mill files with teeth that are rolled over, Chinese steel shaped to resemble rasps, an old square file I might convert to a birdcage awl one day….

Okay, I had some pretty random crap in there that I could easily let go of.

I’ll be honest. This is not the post I started out writing. I started out thinking how useful my machinist’s chest was, how central it was to my woodworking practice, how I kept it organized, and how everything I kept in there had a purpose. And that was true, when it came to the two bottom drawers. When I looked at it with fresh eyes, the rest of the chest turned out to be hiding a hoard of crap (and also some gems that just didn’t have a good home).

I moved most of the sharpening gear to the metal cabinet where I sharpen, and moved the machinist’s chest on top of a mechanic’s chest for now. What remains in it is a collection of files, a few taps, a die, a screw extractor. I could probably store those files in tool rolls to further reduce my need for drawers in the wood shop.

I think I’ve conquered my drawer demons. I concede the clutter argument, but the bigger issue to me is workflow. I want to spend as much time in the flow as possible. To me, that means honing my skills with fewer tools, and keeping them as accessible as possible.

Taking a look around my shop, there is one way to fit in both the tool chest and the sharpening bench: I need to stop hoarding wood (at least in my workshop). Of all the conclusions I’ve reached through this process, this might be the toughest. But if I’m going to create an environment where I can sustain creative flow, I need the room more than I need instant access to wood. Luckily, I have a project coming up that will use a significant amount of the oak I have on hand, oak I harvested nearly five years ago from a friend’s back yard.

I’m sure I’ll build the tool chest before too long. If I have enough oak left, I could make a purpose-built bench for sharpening, one that would support my saw vise (plus the hand-crank grinder I’ve been coveting).

But first, I have some furniture to build.

As I helped my kids carve their jack-o-lanterns this evening, I noticed my mood elevating significantly. There’s no substitute for standing there with a tool in my hand, making something.

In my fantasy life, I would have long, uninterrupted days to spend in the shop, forgetting to eat lunch, jumping from project to project with no care for what got done or how long it took. Everything would be in soft focus and I’d look up earnestly and wonder aloud “is this heaven?” My Elysium probably won’t be set in a corn field in Iowa; I’m guessing maybe a New England state, given the more ready availability of old tools.

In real life, I’m an amateur woodworker with a day job, a mortgage, and a family, so my workshop time comes at a premium. It’s easy to get stuck, or to spin my wheels trying to figure out what to do next. That’s why, when I step into the workshop, I like to have a plan.

Here’s what works for me.

I keep a notebook with my current projects, plus graph paper and drawing paper. For each project, I’ll make a list of each step I can think of. Order of operation isn’t crucial at this point, but if I realize I need something else in place before I perform the task I just thought of, I’ll make a note. The point here is not to have a perfect, unchanging plan, but simply to gather my thoughts. 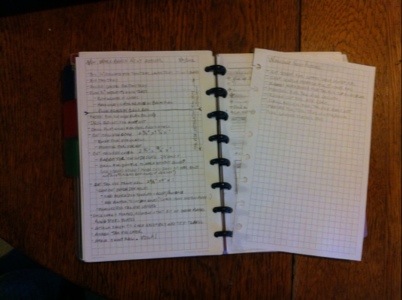 Once I have this done for each project, I’ll go back through and make a short list of any task I could perform immediately in the workshop, regardless of project. Then, when I get my next opportunity in the workshop, I can make the best use of my time. I’ll repeat this process when my short list is complete, when I start a new project, or when life has kept me out of the workshop for a while.

I don’t think the fancy notebook I use has any secret sauce to it. Once upon a time, I was infatuated with it, so I rushed out and bought tons of filler and accessories. I’ll use it as long as I have filler for it. After that, maybe I’ll switch to a bound notebook. It’s a bit like sharpening systems, really. You can be dogmatic about it and thump your chest, or you can just pick something and use it to its fullest.

Over the years I’ve struggled with the argument that a blogger should make some attempt to keep to some focused range of topics.  After all, as a person I am not easily defined by any one of my interests, and I felt that Life Revisited offered an interesting conceit, that the central theme of my creative pursuits was the desire to examine the world with fresh eyes.

I’m finding, though, that it’s naive of me to assume that a reader who shares my interest in poetry might be willing to filter out the noise that originates from my interest in woodworking (and vice versa).  Over the past few weeks I’ve been looking for a new approach, one that acknowledges the Venn diagram of interests I share with my readers.

I plan to continue writing about woodworking on Life Revisited.  I’m excited to explore more hand-tool topics in the coming months.  I’ll probably also contemplate the economics of hand tool woodworking and our relationship as amateurs to the craft of woodworking – fertile soil.